The Shropshire Union Canal is a sixty-six mile rural route of waterway between two industrial centres - Ellesmere Port at the north end and the Black Country and the edge of Wolverhampton at the southern. But three separate companies were involved in the building of the "Shroppie" as it is sometimes affectionately called.

During the late 1760`s a group of Chester businessmen promoted their idea of having a Chester Canal to connect at Middlewich with the recently proposed "Grand Trunk Canal" linking the rivers Trent and Mersey - so that goods would then be exported from Chester (instead of via the Rivers Weaver and Mersey) to Liverpool. However, the Trent and Mersey Canal Company objected to this proposal on commercial grounds and the Chester Canal Company decided that their canal should run from Chester to Nantwich - with only a branch to Middlewich. (This branch however, was not to be completed until sixty years later).

In April 1772, therefore, the then Mayor of Chester, Joseph Taylor, performed the opening ceremony of the beginning of the construction of the Chester - Nantwich canal. At a vast cost of £71,000 the canal was built but it was an unsuccessful project and became semi-derelict through lack of business and with the collapse of a lock at Beeston.

Sample text. Click to select the text box. Click agaThe impetus for this area of canal systems then came from Shropshire, rather than Cheshire! In 1791, a group of businessmen from the Shropshire village of Ellesmere planned a network of canals to link the Rivers Severn, Dee and the Mersey. This Ellesmere Canal would link the small fishing village of Netherpool on the Mersey with Chester and the canal would then follow its course down through Ellesmere and Shrewsbury and on to the River Severn.in or double click to start editing the text.

Sample text. Click to select the text box. Click aIn November 1793 the first section of this Mersey to Severn Canal was begun under William Jessop and a then comparatively unknown engineer - Thomas Telford! The first nine miles of the canal, which is "Our Canal" as it passes through Caughall, Backford, Chorlton, Lea and Mollington, was opened on July 1st, 1795. This waterway proved to be a great success which caused the villages of Netherpool and Whitby on the Mersey as the canal terminus to increase in size and become the port of the Ellesmere Canal - Ellesmere Port.in or double click to start editing the text.

This success resulted from the fact that the canal from Ellesmere Port and beyond Chester was a wide as opposed to a narrow canal. This meant that it was navigable by boats up to 14ft wide such as the flats of the Mersey. This enabled goods to be transported directly to and through Chester from Liverpool. Cargos included grain timber, pig lead and fertiliser.

In addition an important ferry service started between Chester and Liverpool. The journey would have taken approximately three hours and by 1801 15,000 passengers a year were being carried.

All these boats were originally pulled by horses– hence the towpath, until motor driven vessels were used. Telford went on to build wonderful but expensive aqueducts at Chirk and Pontcysyllte, but soaring building costs resulted in a revised change of plan from the original design and the Ellesmere Canal instead of continuing down to Shrewsbury joined the Chester Canal at Hurleston just north of Nantwich. In 1805, the Chester Canal received its first cargo from the Ellesmere Canal system. In 1813 the two Companies merged to become the joint Ellesmere and Chester Canal Company. 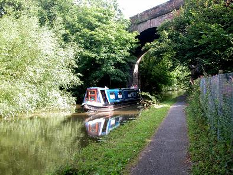 Rail bridge over the canal

A scheme was announced in 1824 which would link Nantwich, the terminus of the Chester Canal with Autherley, a village on the northern outskirts of Wolverhampton where it would join the Staffordshire and Worcestershire Canal. The isolated Ellesmere and Chester operation promptly promoted the idea of building the short link of the canal from Barbridge to the outskirts of Middlewich and this short Middlewich branch (originally proposed back in the 1770`s), under the direction of Thomas Telford was completed in 1833. It was Telford who had the vision and impetus to push ahead with the brilliant engineering of the Birmingham and Liverpool Junction and which now forms the southern half of the Shropshire Union main line. This last great narrow boat canal was commenced in 1826 and although it cost approximately £800,000 to build, it meant that the passage time between Liverpool and Birmingham was only 45 hours. Telford's last link meant that there was now a direct access way northwards from the Black Country to the Mersey and after sixty years the Shropshire Union Canal we know to-day was created.