There are three parish councils covering the area of our villages. These all now have their own web sites, containing all relevant information about the individual councils and their business.

Mollington Pre-School - is situated in the Old School building in Grove Road, Mollington. It takes children from 2 to 4.5years. Parents are welcome to bring children from age 2, but they must remain at the school to supervise them. The Pre-School is OFSTED inspected and provides sessions of play and education. There is also a secure outside play area. Times Mon-Fri 9:15am to 12am.

Mollington and Backford Mother & Toddler Group: are an active group of mothers and fathers who meet every Monday morning between 10am and 12am at the village hall. The friendly atmosphere offers an ideal environment for children aged 0 to 3 to play and mix with others and for carers to have a chat and meet new people. There are lots of toys and an outdoor play area.

Mollington is the biggest of the parish townships. Before 1900, these were the acreages - Great Mollington 1069,   Backford 764,   Lea 697,  Chorlton 544,  Caughall 348. In 1900 Great and Little Mollington were joined for administrative purposes and together renamed Mollington, while the Crabwall Hall area was added in 1936. These two changes added an extra 204 acres to the township. Today Mollington has a population of 680 with 237 households.The two major houses, Mollington Hall and Mollington Banastre, and one just outside, Crabwall Hall, eventually succumbed to the shrinking demand for large country houses, due largely to difficulty in obtaining domestic staff.

Mollington Hall was the centre of an extensive estate for the Feilden family and had continued as such for Gibbons Frost, a Chester flour miller. With no male heir to the Frosts, the estate was broken up by 1930, and in 1938 the Hall was demolished by an Ellesmere Port builder, Cullin. His plans for house building on the site ran into financial difficulties and were only implemented much later. Interesting features of the estate which have survived include the north and south lodges, and two artificially created lakes. There is also a remarkable brick lined icehouse, ovoid in shape, of which two thirds is below ground, with the top covered by soil and shrubs. Double doors at ground level allowed blocks of ice, cut from the lake in hard weather, to be packed with snow and used at the Hall for wine cooling etc. During the war the icehouse was used by the home guard to store ammunition. Surviving the loss of the Hall were its surrounding farms and a nucleus of original properties like the C of E School opened in 1896, and the Post Office. In the days when Mollington Hall was the centre of a busy estate, it would no doubt have seen great social activity. As far as the village was concerned that would have meant annual displays and fetes in the park for adults, and parties for children. The Hall might, therefore, have been sadly missed, except that others were ready to step in: of whom the best remembered is Mrs Nicholson of The Willows. Local residents remember her magnificent gardens and grounds with ripe peaches growing on the wall and tropical plants in the greenhouses. In fact, the 1920s marked the end of the period when leadership in the parish was being provided by the landlords and owners of the great houses.

This is an area of farms and open land, which includes a smithy. Parish Reminiscences recalls the residents' memories of children walking to school, playing in the fields, sailing sticks in the brook, playing in the hay in the barns, chasing rabbits with dogs, and fishing for roach in local pits and the canal. Older residents who remember these glorious days regret the recent decline in the bird population. Unfortunately, there are now few moorhens, because ponds have been filled in; few lapwings because they can't nest on the ground, and for the same reason no skylarks. Yellowhammers are no longer to be seen in the hedgerows, and swifts no longer shriek overhead.

Apart from the working farms and some cottages, the most important if modest building was the smithy, which catered for the local demand for shoeing riding and transport horses, and carrying out repairs to agricultural machinery such as ploughs and harrows. The smithy was founded in 1733 and kept going until 1956-7. The 1914/18 War brought additional activity with two forges, smiths and strikers turning out thousands of horseshoes for the army. 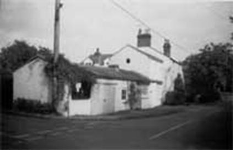 The township of Backford is the centre of the parish and appropriately contains our Church and Village Hall as well as Backford Hall, home for so many years of the Gleggs, a leading family in the area. That family, indeed at one time owned much of the township.

The accepted date of Backford's present Hall is around 1863, though a date around 1848 is probably more correct. However, there have been at least two other buildings on the site, the first being 15th century, if not earlier. It was Edward Holt Glegg who built the Hall seen today.By the early twentieth century, however, the estate had lost its old prosperity and the owners had no male heirs. Birkenhead Glegg died unmarried in 1914, and his brother, Edward Maxwell Glegg, who inherited, had no children. Parish Reminiscences tells of the eccentricity of later members of the Glegg family.The Hall was rented out in 1936 as a country club. Unfortunately the then tenant, Mr Woodhouse, was found to be making forged Irish Lottery tickets, and left in a hurry. 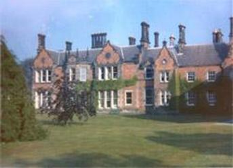 An attempt was made in 1934 or 1936 to sell the Hall to the Salvatorian religious order. Unfortunately this did not work. It seemed that members of the family objected to the sale to a Roman Catholic order; and the Order subsequently moved to Christleton Hall. In 1946 the Hall was sold to a Liverpool company, Dock Services Ltd., then in 1946, to Cheshire County Council.

A strange story from Backford Hall tells of a young servant girl, who met a violent death there many years ago, and whose ghost remains to haunt the mansion. The ghost was sensed at the time of the Salvatorians, and was the subject of an attempted, but apparently unsuccessful exorcism in 1936.

Backford school was opened in 1844. In 1944 it became known as Backford C.of E. Aided Primary School and in 1996 it closed, all the pupils being transferred to the new St Oswald's School in Mollington.

Chorlton has some claim to be the quietest and most remote of the townships. Certainly, its small group of houses has always been difficult to find first time and it feels somehow more separate than other parts of the parish. Many of the memories surround the one large house, Chorlton Hall.

Howard Bradley was a boy living in the Hall in the 1920s. He recalls that the house had five live-in servants. Servants were necessary in number, because many activities were labour intensive. The central heating was coal fired, and had to be raked and stoked regularly - the coal was collected from Mollington Station. Lawns had to be cut by horse-drawn gang mowers - the horse being fitted with 'Wellington Boots' to avoid spoiling the surface - or even with a scythe. Sufficient electricity for the lighting only was home generated, there being a cell house of batteries in the old coach house (now Cholton Hall Mews).

The water supply was at low pressure sometimes, so was supplemented by well water drawn by hand pumping - and even the hot water had still to be carried upstairs in buckets. In the kitchen hung our telephone, a fine old instrument which you had to hand wind to call the exchange. As well as the five servants mentioned, who included a cook, housemaid and nursery maid, we had a gardener and chauffeur, who lived in the two cottages by the front gate; and there were four other gardeners, too.

Chorlton Hall remains the focus of life in the township; however, it has not been the only one over the years. Three dairy farms have existed separately. Chorlton Lodge, Mount and Grove.

The company Wild and Sons bought Lodge Farm in 1946. One of the sons, Oulton Wade, created a pig unit at Chorlton in 1955, in support of a traditional Cheshire System - cows eat grass, their milk is converted to cheese, the whey is fed to the pigs, pigs manure the land to grow grass and so on.

In 1967 came foot-and-mouth disease which caused 100 cattle and 1000 pigs to be slaughtered at Lodge Farm. (The only other farm to be affected in the parish was Grove Farm, next door.) For some time they went out of business, though compensation was paid. In the late 1970s, Wades were asked to make Cheshire Farmhouse Blue Cheese to counter increasing demand in the country. Up to then Lodge had produced only milk, and Wild's dairy in Mollington was committed to plain cheese. The two types cannot be made on the same site, so blue cheese came to Chorlton. Unfortunately the market for blue then became oversupplied and after only three years, blue cheese production was halted. Lodge farm was sold by the Wades in 1993, the house in 1998.

A fourth farm in Chorlton specialised in slaughtering. That work stopped temporarily during the 1939-45 war, when private slaughter houses were closed in favour of centralised control by government, and ceased finally in 1975.

This is the smallest of our parish townships, and the only one lying outside Wirral. After about 1600 and until recently, it consisted of two farms only, each subordinate to an owner elsewhere, and therefore without a large house or social centre. Now, however, Caughall contains part of Chester Zoo (The North of England Zoological Society), which, in order to control movement of animals after the 1967 Foot and Mouth scare, bought all land around it in Caughall

A short guide to the area prepared originally by Mollington Parish Council.

If you see anything happening in your are which appears suspicious, report to 101, giving descriptions and, if appropriate, car registration details.